Documentaries, movies and videos on the Camino 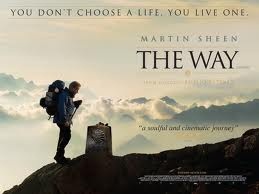 THE WAY - with Martin Sheen as a father who travels to St Jean Pied dePort to retrieve the body of his son (played by real life son Emilio Estevez) after he dies crossing the Pyrenees.

Hundreds of documentaries and films set on the camino are released every year.  You can watch trailers of some on YouTube.  Just type in the words 'el camino de Santiago' and you will be offered thousands of clips.

My favourite documentary movie is:

Within the Way Without by Larry Boulting 2004
The film features Rob Jorritsma as Winter pilgrim, Madoka Mayuzumi as Spring pilgrim and Milena Salgado as Summer pilgrim. Introduction by Sir Richard Attenborough.150 mins, Each DVD numbered and signed by Larry Boulting http://www.csj.org.uk/

a path of roses) Spanish video with English sub-titles interviews pilgrims of many nationalities as well as priests, hospitaleros and volunteers on the Camino Frances incuding the Brazilian poet Lady Foppa. There is a poignant interview with the daughter of Felisa, one of the well-known characters along the way who died in October 2002 at the age of 92. Those who walked the camino before the end of 2002 will remember Felisa, a wizened old woman who had a table outside a ramshackle farmhouse on the side of the road near Logrono with a sign that read, “Higos, Agua y Amor, " (Figs-water and love)   Watch a youtube trailer here. http://www.thefilmwall.com/camino-de-santiago-el-origen-2004/ 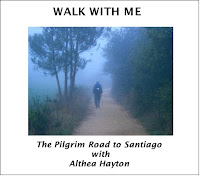 Walk with me: the pilgrim road to Santiago Created and recorded by Althea Hayton:

Las Peregrinas by Sue Kenny - veteran pilgrim, author, and inspirational speaker returns to Spain, to shepherd a group of first-time women pilgrims (in Spanish known as, Las Peregrinas) on their own individual journeys of self-discovery Available http://www.suekenney.ca/.ca/


The Way – Camino de Santiago, Spain
Filmmaker Mark Shea wished to explore the spiritual affect the Camino (Way of St. James) has on pilgrims, by walking the French Way alone and documenting his own personal experiences. http://overlander.tv/

Visit the ancient route of Camino de Compostela - Leon and Santiago de Compostela, Finisterre the western most point of Europe, and the monasteries of Yesu and Hesu, where modern Spanish is reputed to have been created; a tour of Spain’s greatest vineyards and wineries in the Rioja region; and in La Guardia, a perfectly preserved, grand gothic cathedral doorway in it’s original state, preserved and untouched for centuries. (Anybody know where the monasteries of Yesu and Hesu are, please let me know!)http://www.bennett-watt.com/DiscoveriesSpain-Pilgrim-Route-DVD/productinfo/DVDHD9/

Ray and Carol's video on their walk along the Frances dragging or pushing a two wheeled cart. I remember watching this one and thinking, “If they could walk the camino pushing that cart over rocky, muddy paths, then I could easily walk it carrying a small backpack!”
http://www.caminovideo.com/

The Surgeon and the Saint: A professional documentary filmmaker who has produced award-winning documentaries for PBS, the Discovery Channel and A&E. He recently finished an hour-long film about his experience on the Camino. The film is also about the relationship between fathers and their grown sons, and about ambition, religion and the meaning of life. http://www.threemenandasaint.com/com/


On Foot to Santiago De Compostela - Uncertain what to do after college, and needing a physical and emotional challenge to sort his head out, Roman Weishaupt sets off from his idyllic Swiss village to follow the pilgrim trail. The documentary follows his 80-day, 1,367-mile walking journey from the Alps to the Pyrenees and beyond. Running Time: 95 mins. http://www.film.com/movies/foot-to-santiago-de-compostela/17065644

St Jacques... la Mecque - French with English sub-titles. Middle-aged schoolteacher Clara and her two brothers, chief executive Pierre and alcoholic layabout Claude, absolutely hate one another. Imagine then their blood-curdling horror when they hear the conditions of their mother’s will. Their substantial inheritance will go to charity unless the three of them undertake the arduous pilgrimage from Puy-en-Velay to Saint-Jacques-de-Compostelle. Determined not to lose out on their share of a fortune, the three siblings join the pilgrimage with six other people, including Guy, their guide. http://www.amazon.fr/

The Naked Pilgrim Brian Sewell's CTV series about the Road to Santiago from England through France to Santiago http://www.csj.org.uk/

Camino de Santiago: by Everest in Spanish. Video on the Camino Frances. (Bought in Santiago)

Global Treasures CATHEDRAL OF SANTIAGO OF COMPOSTELA Spain
by TravelVideoStore.com (Video On Demand)


Camino de Santiago. El origen - This historical documentary of Galician origin features Mathieu’s, a young Frenchman of the 13th century, passionate search of the Milky Way mysteries. He then moves to decipher the origins of the Camino de Santiago, the oldest- and most famous- cultural and religious route of the Old World.  http://www.thefilmwall.com/camino-de-santiago-el-origen-2004/

The Milky Way (French: La Voie Lactée) is a 1969 film directed by Luis Buñuel. The film is intended to be a critique of the Catholic church, as the modern pilgrims encounter various manifestations of Catholic dogma and heresy. (wiki)

Way of St James: A walking tour of Santiago de Compostela takes you on a tour one sunny August day from the outskirts of the city to the main entrance of the Cathedral. You'll experience the typical sights and sounds of a busy morning, view medieval arhitecture and enjoy performances of Santiago's street musicians.
Visiting the Cathedral of Santiago de Compostela is a complete visual examination of the Pórtico de la Gloria, the Main Altar, the crypt, numerous side chapels and the botafumeiro in full swing. The soundtrack includes the music and prayers of celebration and the echoes and voices of the many visitors to St. James' Cathedral. http://waystjames.com/Video_clips.html


Artiguas
This group of documentaries presented by Carmelo Gomez showcases the main roads to Santiago de Compostela. Every road has two characters as pilgrims who made the journey on foot. Through them we learn the latest news from the road. Carmelo Gomez deals with past history and legends and tell us what they were, how they were formed and what happened to these roads. Running time: 480 minutes. (120 minutes per DVD) Language: English Audio: Dolby Digital 2.0 Released: 2006
DVD1: Presentation of Our Roads to Santiago Roads Levante 1 & 2
DVD 2: Camino de Madrid : Roads Jacobean Ebro I & 11 Road north of I
DVD 3 Northern Way 2 : Camino English and sea routes Via de la Plata 1 & 2
DVD 4 French Way 1, 2 and 3 : Extension to Finisterre and Jacobean Muxia.
Extra Content: Animated Menus, Scene Selection, Webs, ACOG, associations. http://www.arteguias.com/videorutas.htm

Via de La Plata DVDs: The discs contain fourteen 45-minutes episodes for a total duration of 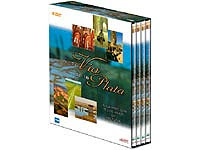 640 minutes. Each episode covers a specific 80 to 100 kms segment and it completes the entire 1,000 kms of the Via narrating the history and circumstances of its creation over the last 3,000 years, and visiting its most important and emblematic monuments and places. The full title of the DVDs is "Ruta Via de la Plata". http://www.divisared.es/

ROAD TO SANTIAGO (Lazona/Antena 3/ZircoZine, 2009) "Demonology" is the missing link between a demon-possessed murderer and victim. Rodrigo Santiago's $4.5 million couples-in-crisis romantic comedy -- set against the painterly background of Galicia's hills, dales, barns and the Camino -- bowed in April (Warners) and generated $3.6 million in box office, landing it in the No. 4 spot of Spanish films this year.

THE WAY (Elixir/Morena, 2010) In Emilio Estevez's film, Martin Sheen plays an eye specialist who travels to the St. James Way to recover his son's corpse, and finds spiritual redemption on the Way. Shoots Sept. 28.

THE APOSTLE (Artefacto, 2010) Fernando Cortizo's $10 million digital 3-D stop-motion pic is set in rural village Xanaz, which preys upon unsuspecting foreign pilgrims. Cortizo is currently courting international distribution for his murder-mystery that he believes will "offer a beautiful window onto the magical atmosphere of Galicia and the Camino." Release date is July 25.

WHERE IS HAPPINESS? (Pulsar/Filmanova, 2010)Carlos Alberto Riccelli's $4 million Brazil-Galicia romantic comedy about a betrayed wife who walks the Way to get her life back on track. Filmanova's Anton Reixa has high hopes for the film -- especially in Brazil where there's tremendous interest in the Camino. Shoots by spring.

This group of people need help in the final edit and production of their Documentary which is about the experience of walking the life-changing, 500-mile pilgrimage across Northern Spain known as “The Camino de Santiago”. The film follows six strangers from incredibly diverse walks of life, as they attempt to cross a country on foot with only a backpack, a pair of boots, and an open mind. Driven by an inexplicable calling and a grand sense of adventure, each pilgrim throws themselves heart-and-soul into their physical trek to Santiago, and their personal journey to themselves.

In Between - a documentary on the camino frances
http://www.blaastfilm.no//default.aspx?menu=40&id=27


©2007 Amawalker. All original writing and photographs on this website.
Please ask for permission before using any part of this blog on your own blog or website and then include a credit or a link to this blog.